Patser (Gangsta) is the third film by directors duo Bilall Fallah & Adil El Arbi. The dynamic duo that previously made 'Image' and 'Black, and would direct 'Bad Boys For Life' after this film'.

It's about four dealer friends in Antwerp, who want to become real life swaggers. Only their lives spin out of control when they steal a shipment of cocaine and trigger a full-out war between them, and Amsterdam drug lord and the ruthless Colombian cartels. Starring Matteo Simoni, Nora Gharib, Nabil Mallat, Saïd Boumazoughe and Junes Lazaar.

Patster is my fifth design collaboration with Stijn Verhoeven, who art directed this film (after Tytgat Chocolat, H.I.T., Lost in the middle and Alleen Eline) and by far the most creative. Though I did not design the Patser Logo, my job was designing everything from billboards hanging in the streets, Colombian drug stamps, olive oil labels, to the entire front and inside graphics of a Moroccan pizza restaurant. All gloriously climaxed by some over-the-top slow-motion boxing match graphics illuminating a big fight night. 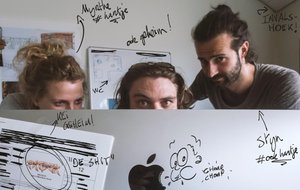 ltr:: Myrthe Douma, me and Stijn Verhoeven having a blast!

Below are some of the designs I made for this incredibly awesome and versatile project. Patser is a rollercoaster of a movie, so I hope you spot my design all around the settings.

FROM BILLBOARDS TO EXPLODING FONTS

As is very often the case in productions, every billboard or advertisement you see in the universe of Patser is fake. They are designed to enhance to visual canvas en complement on the story. When designing these ads, we had to make sure they fitted the bigger picture. There should be an Eighties element in it (either visually or with colour), and the concents should fit the minds of the characters: money, luxury, play, Patser-like behaviour. I came up with a couple of 'ficticious brands' and created ads for them.

Olive oil plays a big part in one of the characters' life. No spoilers on why. But naturally, we couldn't just use a known brand of olive oil, so we had to create one. We came up with this non-existing brand of delicious Moroccan olive oil and made labels fitting big jars and smaller bottles.

The design of the pizzeria graphics is something I will always remember. I never had any of my designs actually blow up (no VFX fire, just really blow up). And now I'm hoping to see many more of my design go up in a glorious blaze! Since we this graphic would burn to a crisp, we symbolically used a very specific font the world would be better of with if it were blown of the face of the Earth, guess which one!

For a fighting scene in Patser, I made one of those typical badass big screen graphics that usually hang around fighting arena's in the US. Though they usually use photos, I wanted it to move. So we shot the actors at high frame rates in front of a green screen. In my mind, the red and blue glowing lights are lightsabers. They're not, but I came so close to designing lightsabers for the big screen, I'm just going to predend they are!