Baptiste is a BBC series that is a follow-up to the critically acclaimed 'The Missing', of which 2 seasons have aired. Don't think of it as a third season, but a as a new series, where Julien Baptiste (played by Tchéky Karyo) takes on a new case in Amsterdam. Other starring roles were Tom Hollander, Jessica Raine and Belgian actrice Barbara Sarafian.

For 5 months (June to Oktober) I was the graphical designer on this project. And that's massive, because Baptiste takes place in Amsterdam (and its Red Light district), but was filmed in Belgium, we had to recreate Amsterdam right here. Also, BBC doesn't show brands, so every label, every beer, every cigarette, had to be designed.

This meant coming up with multiple fake brands and their designs every day, checking names with the legal department, and design everything quick enough to be printed/rendered and ready for set. A peanut butter label, a fake meditation app on a phone, a 5 metre high neon sign, a logo for a ficticious airline,..., all in a day's work. 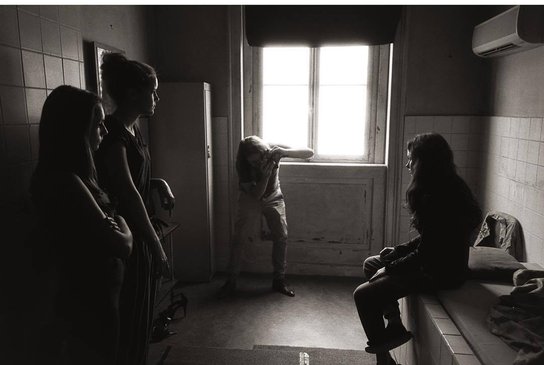 The series launched on BBC in February 2019 and is currently available on Netflix. You can watch the trailer abobe. As well as a personal memory of the series: a picture taken by director Börkur Sigthorsson himself, while I was on set taking a photograph which was later used to create a hero prop: the picture you see Tom Hollander holding in the trailer. It's an amazing reminder that, even if you are working on a big BBC series, you're still dealing with kind-hearted, wonderful people. Thank you, Börkur, it's been an honour designing for you and bringing the world of Julien Baptiste to life.

Some screens with designs (SPOILER ALERT)

All graphics in frame below, from ID cards to neon lights, from posters to labels, were designed. All photos were shot as well.